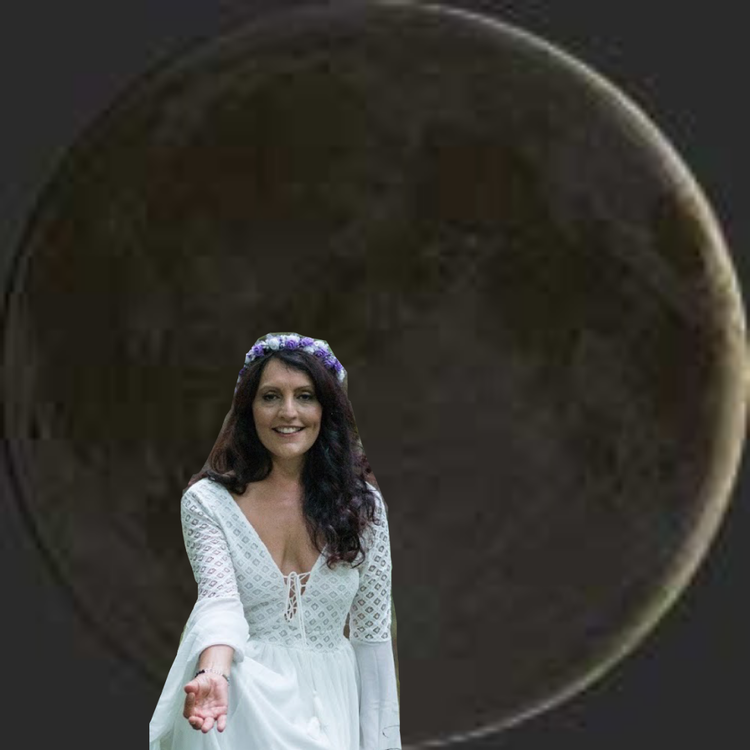 May’s New Moon brings change and spontaneity as some of you may have ventured out a bit more for the first time in a couple of months! So, as you went out into the world again, how was it different for you?

Since, your time in quarantine, how have you become more? This time inward, gives us gifts to elevate our consciousness to greater view points. Can you see what the gifts are that you received from being in quarantine?

This time of the New Waxing Crescent Moon, is the perfect time to begin to draw new intentions to you. The Moon’s illumination is at 8 %. The first 0-15% of the Moon’s illumination is considered the New Moon period. As the light grows, tune into the feeling state of already having your dream, intention or goal. Tune into the light, prosperity, play and joy or whatever you are desiring.

We are now in the time of the heart of creation in our awakening new world. How does it feel to create from your heart?

As for me, I’ve been creating quite a few things! I’ve completed my B.A.R.E. Life Coaching course! Woo Hoo!!!! I am developing a new website, and re-structuring my current offerings to have three main programs to share sacred empowerment with others!

Archetype of a Witch Since Childhood

When I was a little girl, I grew up obsessed with two magical television shows; Bewitched and I Dream of Jeannie. I always felt that I had the lead female character’s super powers. My mother is psychic and would just “know things”. I also felt and sensed everything at a much deeper level then other kids my age and even adults. I was highly sensitive and never felt like I fit in. I had a delicate stomach, did not talk much, unless it was one on one, and even then, I had to feel extremely comfortable with the person before I would speak.

I would pretend that I did not know what I intuitively knew because I did not want adults questioning me. There were a few times when I did give answers, and truthfully, my parents, teachers and church leaders did not want those answers. They were not ready or able to hear my truth. I never felt I was better than anyone else, just different.

One Halloween when I was about ten years old, I refused to wear another Halloween costume with a mask. (It’s ironic that there’s a mask issue going on now, while I’m writing about this mask issue.) I was too old and did not like my nose and mouth being covered. The previous year even adults laughed at me for wearing one of those little kid’s masked costumes.

My mom asked what I wanted to be and I said a Witch. So, she took her green eye makeup and colored my whole face green! I had a Witch’s hat and wore a black dress of hers. I was in HEAVEN. For someone who was shy and would try to hide my light, I was BEAMING from the inside out! Every door I knocked on, people would ooh and aah at me and I would present them with a playful, wicked grin.

Then at the age of twelve, I found an occult section in the public library. I did not know exactly what occult meant, but I was drawn to that section. Occult means the supernatural, mystical, or magical beliefs, practices or phenomena. I began reading books on Witchcraft. I don’t really remember seeing anything about Wicca back then.

But, I loved everything that I was reading. Whatever books I was blessed with reading taught me right away the power of magic and the importance of using magic for the power of good. I realized magic used for selfish reasons would back fire, sort of like karma.

Next, in my high school acting class, we were putting on the play, The Wizard of Oz. I tried out for the role of Dorothy and I was casted as The Wicked Witch of the West! What a miraculous turning point.

The acting teachers were fabulous and had experience from Broadway in New York. One of the teachers kept working with me and taught me how to laugh as the Wicked Witch of the West. Oh my…..when I roared that wicked laugher into the theater, you could feel the energy rise! I felt the energy rising inside of me. It was truly an epic adventure.

Click on the picture of the Wicked Witch to hear my laugh BUT…fair warning, it can be startling.

After a few shows in the high school theater, we took the show on the road to local elementary schools. We would get fan letters and there were many times when I received the most fan letters, which were absolutely adorable. The kids resonated with me. They would write me things like, “You know, I think on the inside you’re really a nice witch. You probably didn’t mean to do those bad things.” They would sign them “Love,_____”.

I think what the kids resonated with witnessing my “Witchyness”. We all know there’s dark and light in each of us. I think for them it was a story like…here goes this Witch…with all of her darkness and they could relate to a part of me. They did not try to shame me. They just said that they believed I was really good and they wanted me to see that too. Such smart kids!

Those kids got comfortable with the uncomfortable ‘badness’ or shadow aspect of the Witch archetype. But they also saw all of her magic and light! That truly is the yin and yang of life. 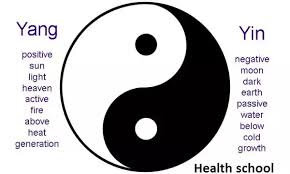 The Witch archetype scares some people, and rightfully so! 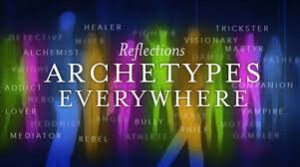 The trauma associated with the Witch hunts that began by Patriarchy and Christianity lasted for over 500 years. It is noted that 50,000 to 100,000 people were reported to be burned, hung or tortured to death with 80% of them being women. However, the true number of deaths from Witchcraft is believed to be over a million because most were not reported.

The Witch hunts were a persecution of women. These women were usually natural healers using herbs and past down remedies from ancestors and their tribes. Women were murdered as a way to scare, dominate and control them into believing they were a weaker sex. Men feared independent or powerful women, and used “witchcraft” as a way to keep women in their submissive roles.

Below is a picture of Anna Goldi, the last Witch killed in Europe-Switzerland on June 13, 1782. Apparently, her married employer abused his power, after having an affair with her. Anna Goldi threatened to reveal the truth and he accused her of Witchcraft. The historian, August Ludwig von Schlozer described this murder as “a murder of innocent, deliberately, and with all the pomp of holy Justice”. In 2008, the Swiss parliament exonerated her in the grounds of an illegal trial. 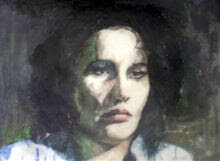 Below her, is a picture of me. I think we have an uncanny resemblance to each other!!!!! My daughter says she looks like a relative of mine. Spooked me a bit! We have the same eyes, nose, hair, high cheekbones. Oh my! 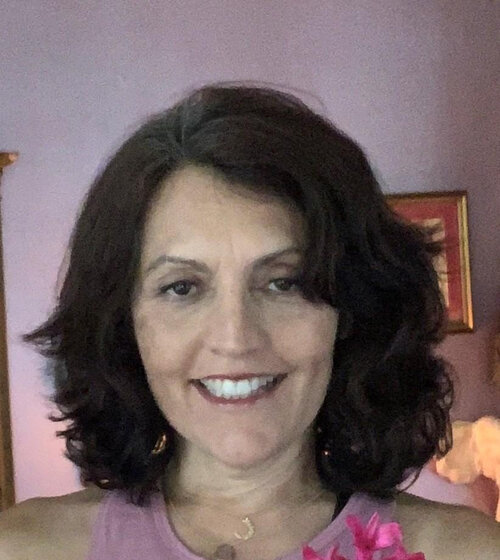 After doing research on witchcraft executions, I discovered that Saudi publicly beheaded a woman in 2012 for witchcraft!

According to brittanica.com, in 1484 Pope Innocence VIII” issued a statement acknowledging the belief in witchcraft.

“The executions of persons thought to be practicing witchcraft were increasing throughout western Europe. In a bull of 1484 Innocent acknowledged belief in witchcraft, condemned it, and then dispatched inquisitors to Germany to try witches. “

The murder and mass torture of countless women on the grounds of Witchcraft is considered the holocaust of woman. Below is a sketch of a mother, two daughters and an infant being burned of Witchcraft. 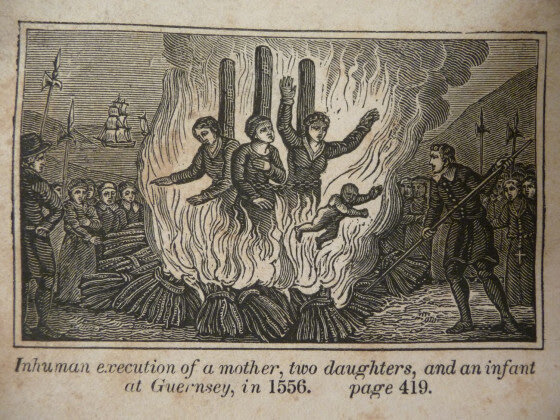 Woman were deemed the weaker sex and considered more carnal. A woman’s body was (and still is) blamed for men’s desires. The only purpose the killing of women served was to enforce control.

Look at how powerful that stereotype is to this day. In the twenty-first century, people still turn their heads and hide from women who practice Witchcraft.

Mass killings like the accusations of Witchcraft, the Holocaust of Jews, and the genocides in Africa are a part of the history of humanity. This brings us to today and COVID19.

COVID19 has begun with taking the lives of those with weaker immune systems, including our elderly, our wise, our parents and grandparents. Atrocities of wrongful deaths continue right in front of our eyes.

You may be wondering how I can be a Wiccan Christian High Priestess when I know the history of the Pope, Christianity, and men’s war against women?…Well, I still love men and I still love Christianity. I love the divine in their hearts, the hope, the faith, the Miraculous Mother, the loving father God, the Holy Spirit and of course, my highest aspirations, that of Jesus Christ and Mary Magdelene!

Can I get an Amen to that one?

I consider myself to be a

I believe in a passionate, creative feminine Divine intelligence that created our world, as well as, a loving father God that does not judge.

I believe in following the highest truths of love and compassion.

I believe we are sacred beings with unlimited potential.

I believe in listening to the wisdom of my body and following her guidance.

I believe in self acceptance, self preservation, self expression, self-gratification and the importance of knowing thy self.

I believe in Jesus’ teachings of tolerance, inclusiveness and non-judgment.

I believe in living in harmony with the energies of the Moon, Mother Nature, and the Cosmos.

I believe in living life in balance by honoring our light and our shadow self.

I use the natural laws of the universe to co-create my world with the Divine.

I believe in the birthrate of each individual to be a Priest of Priestess and hold their own rituals, if that is one’s desire.

I believe in holding myself accountable and responsible.

I believe in gratitude and magic!

As a Witch, to tune within my own Nature, I tune into Nature. In the blossoming of the flowers is also my essence. Nature is neither cruel nor kind, bad nor good.

So, if  I have not scared the holy Jesus out of you, and you are interested in learning more about Wicca, here is information on the next 13 week course on Wednesdays this summer from June 24 to September 23.

Who’s ready to get Witchy this Summer? 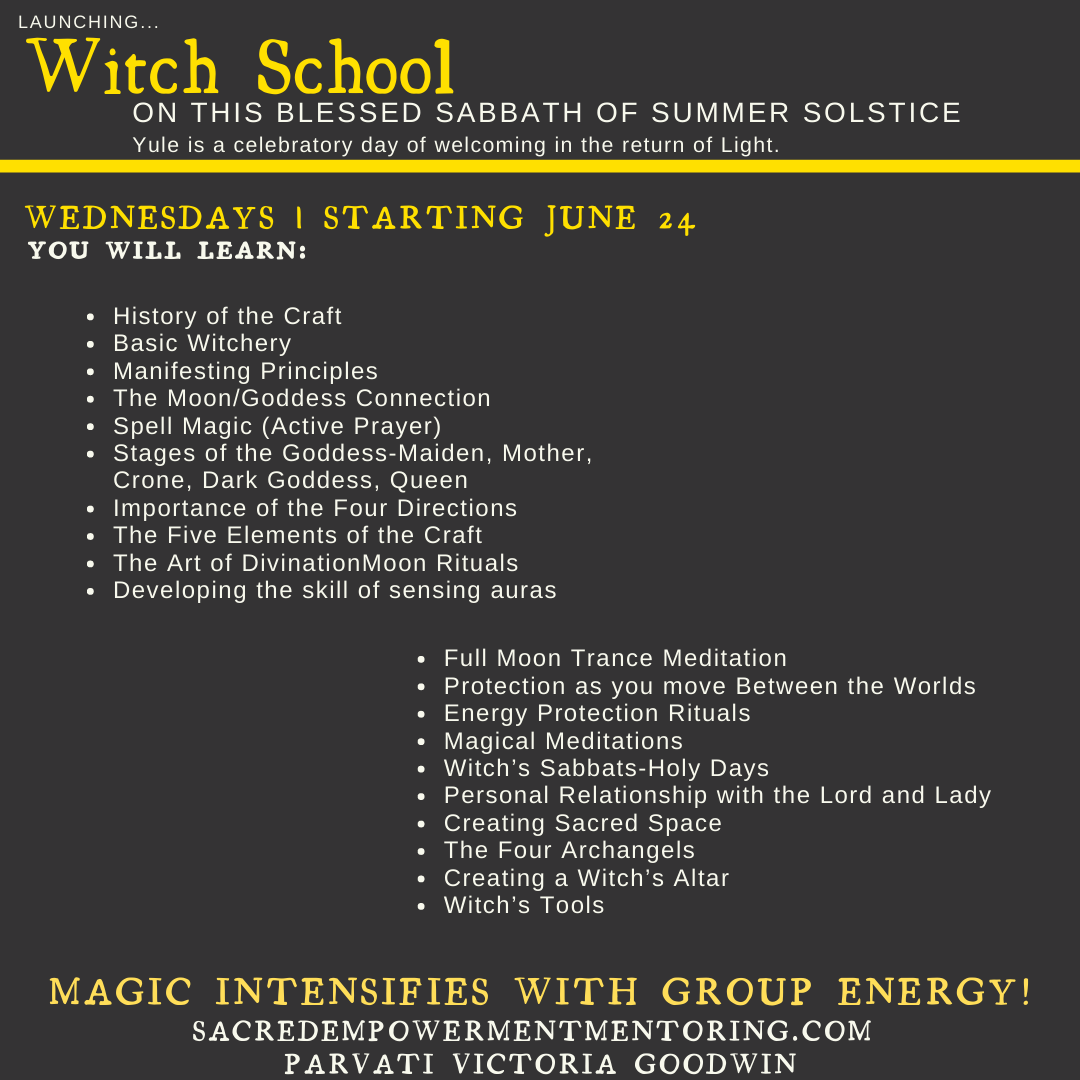 If you have any questions, please let me know!

Wishing each of you a fun and safe Memorial Day.